Take away the Dome Building from the background of pic 1 and the scene could resemble that found in many municipal parks around the world. However, Hiroshima’s Peace Park is no ordinary park, of which the Dome Building is the focal point and one of many memorials within the Peace Park.

Walking in the park

Four years to the day after the bomb was dropped, the decision was taken to devote the area to peace memorial facilities – a major change from the area’s previous role as Hiroshima’s political and commercial centre. Construction of the park took place between 1950 to 1964 and for those interested in early footage of this period, I again refer you to the classic French movie titled “Hiroshima Mon Amour”.

The Cenotaph for the A-Bomb Victims (pics 2 and 3) straddles a direct line of sight between the Dome Building and the Peace Museum. Below the arched tomb is a stone chest with a register of the names (more than 200,000) of those who perished in the initial blast or through subsequent exposure to radiation. At the centre of pic 3, one can see the Peace Flame, which has burned continuously since it was first lit in 1964. The Flame stands as a perpetual beacon for peace and will only be extinguished when all nuclear weapons are destroyed. Sadly, one must wonder if that will ever happen. 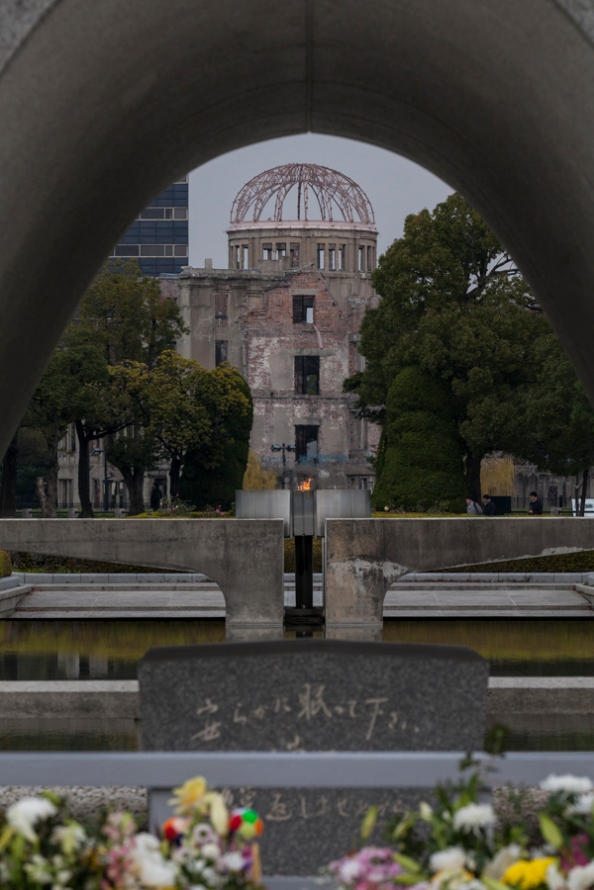 To the east of the Cenotaph lies the Hiroshima National Peace Memorial Hall, a beautiful yet sobering remembrance to the atomic bomb victims. On the roof of the mostly underground memorial (pic 4), one will observe the clock frozen at 8.15am to mark the time the bomb exploded and the cascading water, symbolic of survivors’ craving to quench their thirst.

Below ground the central feature is the Hall of Remembrance (pics 5 and 6), which features a 360-degree panorama of the destruction following the blast. To create the panorama, a total of 140,000 tiles were used to represent the estimated number of people who died from the bomb by the end of 1945. The depiction of individual victims through their photos on a bank of frequently refreshing screens (pic 7) communicates the personal cost of the tragedy and serves to remind us how many families must have been impacted directly or indirectly. 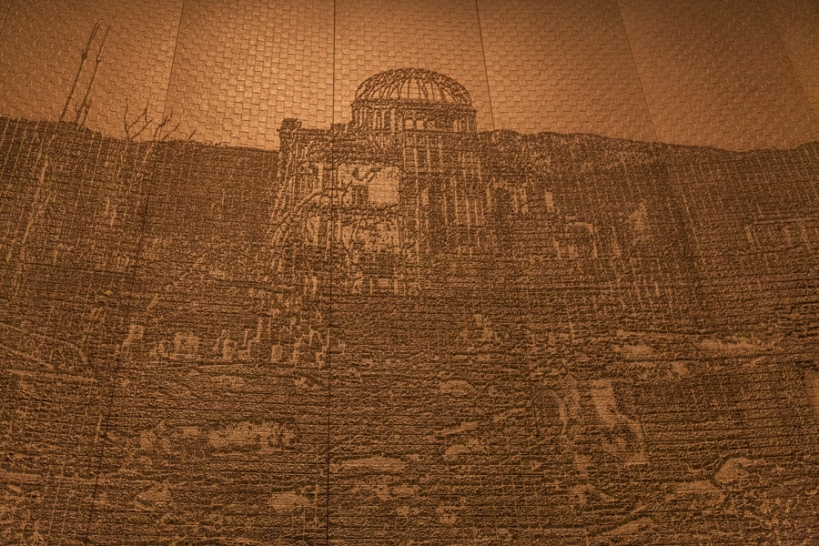 A particularly poignant memorial is the Children’s Peace Monument to commemorate the children who died as a result of the bombing. Pics 8 to 10 show a group of students paying tribute in a ceremony that ended with laying a bouquet of folded paper cranes at the base of the memorial. (I would have shared the moment photographically had an overly zealous teacher not blocked my view.)

The statue atop the monument shows a girl with outstretched arms, above which is the representation of a folded paper crane. This depiction was inspired by the true story of Sadako Sasaki, a young girl who had appeared to survive the blast only to succumb to a radiation related illness some years later. Sadako’s belief that by folding 1000 paper cranes she would be saved was sadly not enough to save her. However, her story lives on through the adoption of paper cranes (pic 11) as a symbol of peace. In fact, it is estimated that more than 10 million paper cranes per year are sent to Hiroshima, mostly from children around the world. 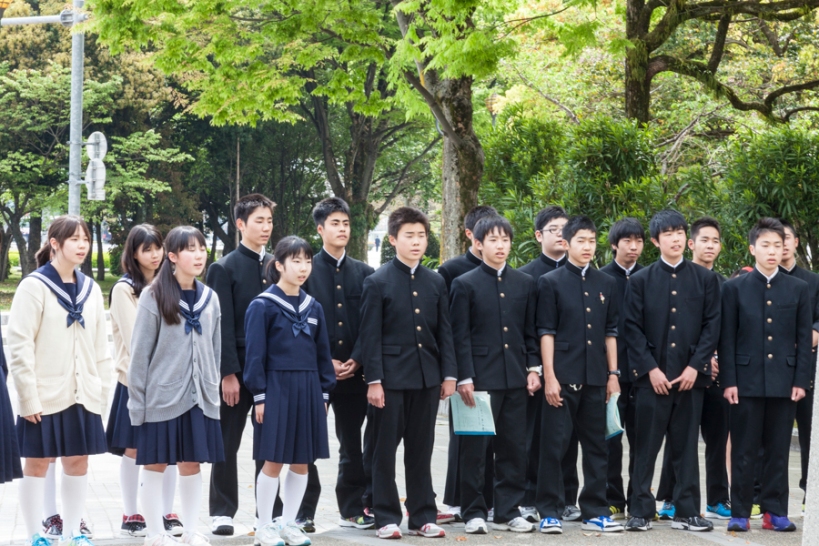 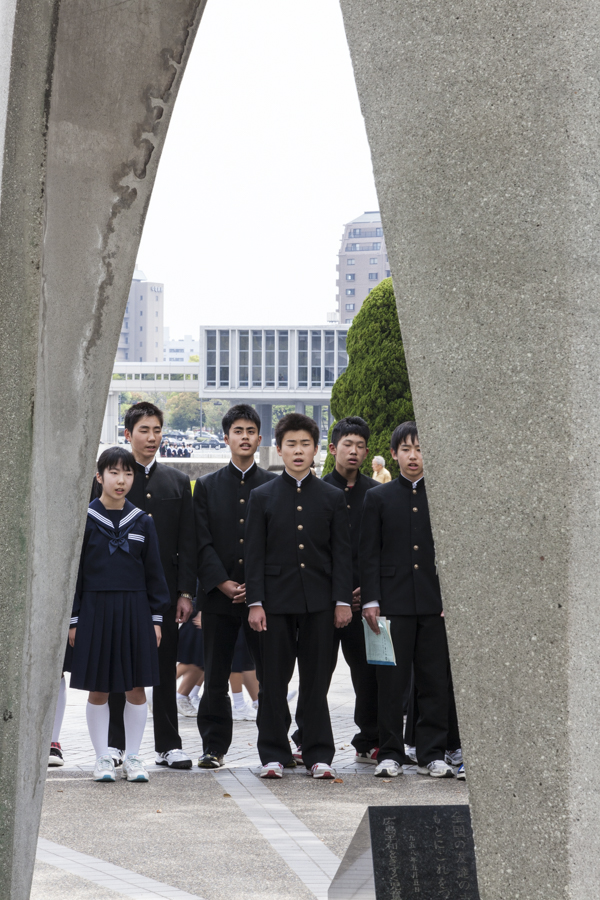 As one would expect, not all victims could be identified and the grassy Memorial Mound (pics 12 and 13) contains the ashes of an estimated 70,000 unidentified victims. Similarly, the number of Korean nationals who perished is uncertain and the Cenotaph for Korean Victims (pic 14) was created to honour victims and survivors from the bombing and from Japanese colonialism. An inscription on the statue reads “Souls of the dead ride to heaven on the backs of turtles”. 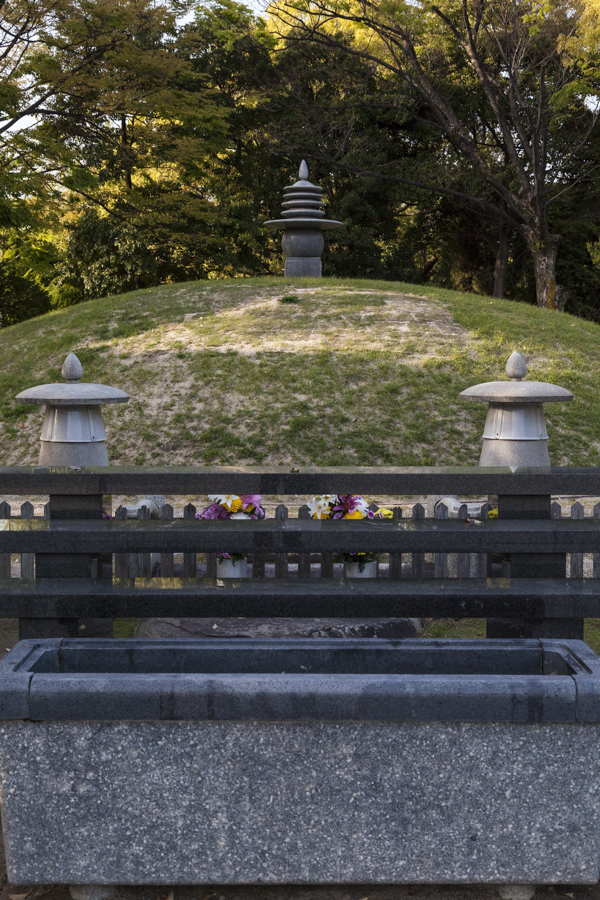 Two statues of very contrasting styles encapsulate the message of the Peace Park. The first is the “A-bomb Victim – the Monument of Hiroshima” (pic 15) located 141 metres south of the hypocentre by the bank of the Motoyasu River. The bronze sculpture remembers those victims who were killed instantly by the blast and serves as a graphic reminder of their horrific end. Although the sentiment behind the sculpture is positive, the twisted, distorted representation of the victim remains confronting. Further along the river, close to the Dome Building, one finds the statue of a girl and boy with the boy holding a dove (pic 16), which communicates hope for a peaceful future. These two contrasting sculptures that show the horror, yet advocate for peace is very much the message of the Peace Park. 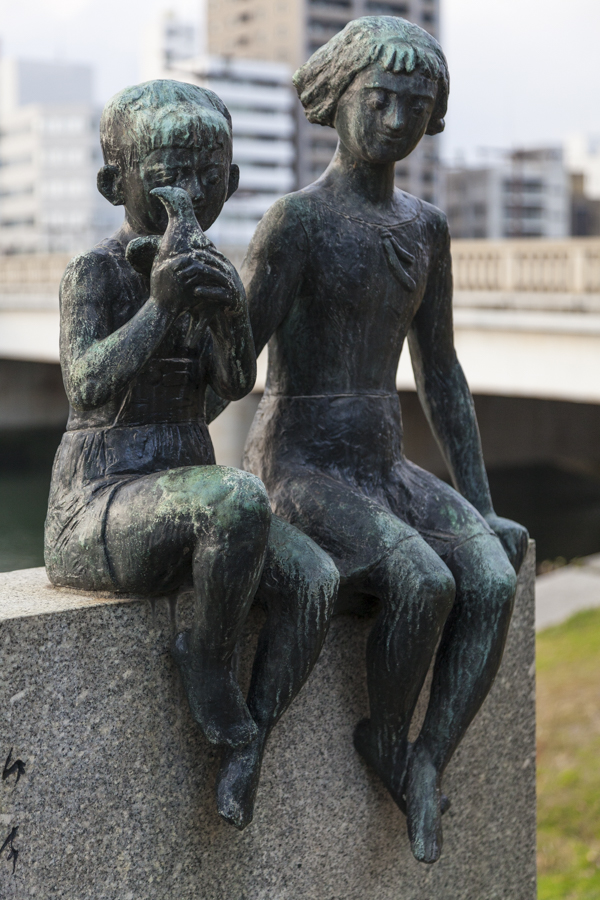 To a Peaceful Future

In conclusion, I would like to remember the resonant sound of visitors ringing the Peace Bell (pics 17 and 18) located near the Children’s Peace Monument. This is perhaps the most pleasing sound one hears in the Peace Park. The Bell, donated by the Greek Embassy, is inscribed in Greek, Japanese and Sanskrit characters, which translate to “Know yourself”. I rang the bell only once during my final visit as a mark of respect and to bid farewell to Hiroshima. Whilst I cannot speak for others, I found the experience of ringing the bell as akin to that of making a commitment to support the message of the Peace Park. 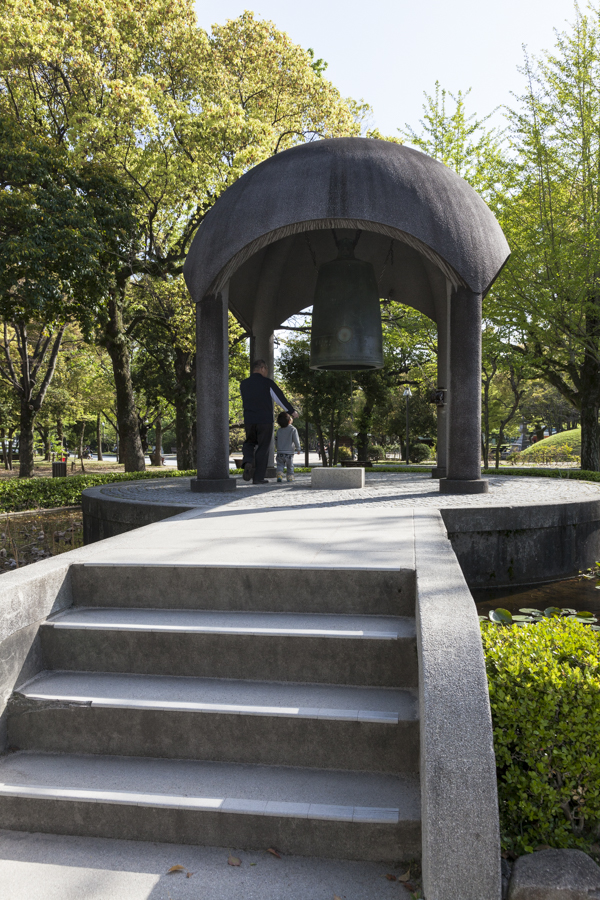 (Please click on any of the images for an enlarged view.)