For a country where the tea ceremony is an integral part of its cultural heritage, the Japanese people also appear to enjoy the pleasure of lingering over a coffee – particularly in the major cities where cafés abound.  Currently, the coffee scene is dominated by franchise operators, although one does find interesting independent cafés, which, as the coffee culture becomes more established, are likely to become more popular.

The first three photographs show examples of three popular franchises and I must say I would not be surprised if Tokyo is the Starbucks capital of the world.  They are everywhere!  The Shibuya Crossing Starbucks (pic 1) is probably the most prominent and is a great place for people watching, as is the Café Doutor (pic 2) overlooking the Ginza Crossing.

However, the variety and individuality of independent cafes can be seen from the other photographs such as Kyoto’s Café Yoshiko (pic 4) where customers can enjoy views of autumn colour and cherry blossom in season.  Similarly, the stark white minimalist look of the café in Niigata (pic 6) is so Japanese and The Deck at Harajuku (pic 7) is a great place for a warm snack and coffee.

Other places I remember fondly is Binya café (pic 8) in Ebisu.  I first came across Binya while walking to Tokyo’s magnificent Museum of Photography.  Enjoying coffee served in fine china is relaxing and a nice break from the hectic pace of life so characteristic of Tokyo and the temptation to order “takeaway”.

Wandering through Kiyojima (one of Tokyo’s old areas) led me to MuuMuu Coffee (pics 9 & 10) where I enjoyed lunch and a chat, only to learn that the barista had learnt his skills working in cafés in Melbourne (my home town).  Sometimes it truly is a small world.

My final shots are of Café Mazekoze in Nagano where I was (as usual) wandering the streets after visiting the Zenkoji Temple.  I was at first attracted by the bric-a-brac outside, but upon walking through the door I was immediately allured by the aroma of freshly brewed coffee.  Quite irresistible!  Again, conversation with the owner revealed another “small world” experience in that her sister now lives in Edinburgh – where I was born and grew up.  It is meetings like these that enrich travel and as so often happens, I left with a recommendation to visit another nearby temple.

Coffee breaks not only refresh us, but they can result in lasting memories of places visited.  I hope these photos help you to remember similar experiences. 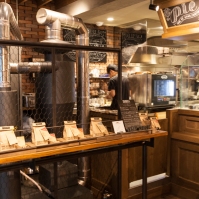 The Deck at Harajuku 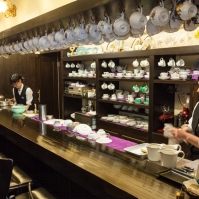