To conclude this series of posts on Asakusa I have selected shots to show what visitors may typically see if strolling the streets of this interesting and often quirky area.

Designed by Phillipe Starck, the renowned French designer, the “Flamme d’Or” (Flame of Gold) atop Asahi’s Super Dry Hall (pics 1 and 2) is difficult to miss. The Super Dry Hall takes the shape of a beer glass and is quite architecturally striking in its own right, but absolutely unmissable with the 300 ton Flamme d’Or perched like a crowning glory. The building to the left is the Asahi Beer Headquarters, with the complex of buildings occupying the site where Asahi started brewing beer over 100 years ago.

Visitors will usually spend some time walking through Shin-Nakamise (pics 4 to 7), an undercover arcade running parallel to the more famous Nakamise Dori approach to Sensoji Temple (refer to previous post).

On the outside streets there is much to catch the eye. The Nimi building, or as I prefer to call it, the Tea Cup building (pic 8) presents as an eccentric novelty. However, it is actually in keeping with Asakusa’s hosting of many businesses supplying product to the hospitality sector, an example of which is a vendor’s display of takeaway food trays (pic 9).

Translation is always good for a laugh and although the antique shop’s wares (pic 11) appear interesting, my attention was initially caught by the misspelt word (“planing” rather than “planning”). Nonetheless, I freely admit that their attempt is much better than I could manage if operating in reverse.

Tokyo must go close to being the Starbucks capital of the world (pic 15) and yes I did succumb to taking a break and enjoyed looking out over Asakusa life from an upper level vantage point. Just as Starbucks is everywhere in Tokyo, so are bicycles (pic 16) and titling the shot as “bicycle calamity” is probably unkind. What most impressed me about this and other bicycle parking I observed in Japan was the general absence of security devices to prevent theft. I read recently that one of the reasons for the low crime rate in Japan is the high proportion of travel made on foot or by bicycle and perhaps there is some credence to this argument.

I felt a bit sorry for the rickshaw operator being passed by the cyclist at pic 17, as it is was hardly a fair contest in “power to weight” terms. It never ceased to amaze me how fit the rickshaw operators are and their ability to maintain conversations with their clients while jogging along.

My farewell to Asakusa is pic 20, which serves to remind that no matter how busy and bustling life can be, water and greenery combine to create opportunities to enjoy tranquil moments. 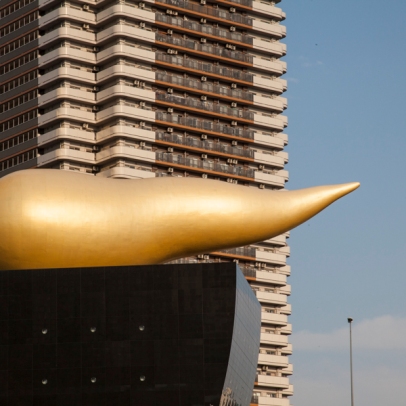 Between shops and the station 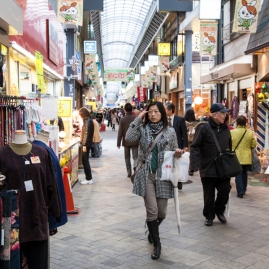 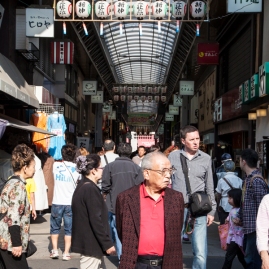 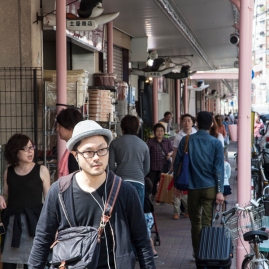 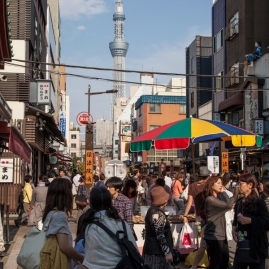 4 thoughts on “Streets of Asakusa”