Higashiyama is one of the eleven wards that comprise the city of Kyoto and is well known for its examples of old Japanese architecture and for a number of significant historic sites within the ward.

I have covered many of these historic sites in previous posts and today I would like to share images of a more whimsical everyday nature. Whilst I will be forever impressed by Kyoto’s better known sites, I also enjoyed my walks between these sites and took many photos to remind me of the little joys of walking around the Higashiyama precinct.

I will restrict my comments to brief mentions of the Tokei-ji Temple (pic 14) and the Wakamiya Hachimangu Shrine (pic 15). Tokei-ji is a small temple that dates back to the mid 18th century, which was transferred to its present site in 1860. Also known as Akiba-san (after the main object of worship), the temple is seen as a guardian against fire-related calamities and robbery, as well as for safety at home.

The Wakamiya Hachimangu Shrine was established in 1053, with the main deities enshrined being the Emperor Ojin and his parents, Emperor Chuai and Empress Jingu. The shrine was moved several times before settling at the present site in 1605, with the present shrine buildings dating back to 1654. A four-day pottery festival is held from August 7th through 10th each year in commemoration of the deity of pottery (Shiinetsuhikonomikoto) who was enshrined here in 1949. 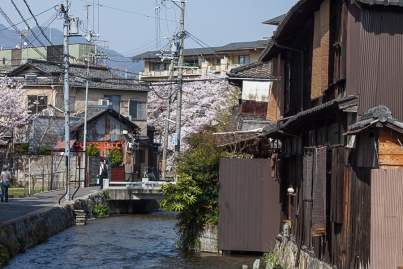 Strolling by the canal 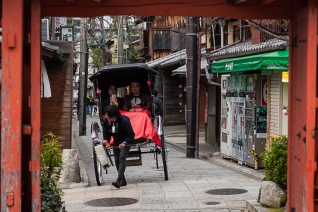 Working hard to make a living