When travelling it is easy (and not at all unreasonable) to seek out pleasurable experiences and pay little attention to social issues that may be of greater concern to us in our home cities.

Homelessness is an issue that seems to be common across all countries and the more highly developed and relatively affluent societies such as Japan are not exempt. This may come as a surprise given Japan’s homogeneity in class terms where it is estimated that more than 90% of Japanese people are deemed to be middle-class. In many other western societies, a rate of 90% would be considered a thing of the past and an unattainable dream in today’s world where western governments are disproportionately influenced by corporate rather than societal concerns.

Nevertheless, people fall through the cracks in all societies and it is estimated that Tokyo alone has more than 5000 homeless – mostly men over 40, many of whom are likely victims of changes to Japan’s corporate culture where Salarymen (and women) can no longer assume that loyalty will be rewarded with jobs for life.

I did not seek out photographs of the homeless, though with the benefit of hindsight it would have been an interesting project. One must be sensitive to individuals’ needs and for this reason I tended, in most instances, to resist taking such shots. However, in terms of general observations, I was never troubled or approached for money by homeless persons in Japan, something that certainly does not apply in my hometown. It was also noticeable that they were, in effect, not noticeable on city streets, at least during the day. One would encounter homeless people sleeping rough around subway stairs at night, but during the day I mostly came across the homeless in parks, where they would sit quietly and contemplatively on the benches. Their possessions would, for the most part, be stowed away in less obtrusive areas of the park.

The convention seemed to be that people leave the homeless alone and vice versa. Whether such mutual respect and tolerance will continue if the issue worsens is difficult to predict. In fact, the only time I recall seeing the homeless openly express some anger was in Kyoto prior to a long holiday weekend when the police were not allowing the homeless to settle in the vicinity of Kyoto Station.

All the selected shots were taken in parks; some in Ueno Park – a very popular recreational area, particularly at weekends when families flock to visit the nearby zoo, galleries and museums. Others were shot in a smaller park across the road from Tokyo’s billion-dollar Metropolitan Government Building, an irony impossible to ignore. Indeed, pic 3 shows a rather forlorn homeless person resting within the forecourt of the Government Building.

Of the other images I wish to comment on only the first (pic 1) and the last (pic 10), in that I personally consider these images to be the most powerful. When I shot Bed is a Park Bench (pic 1) and checked the image on my camera’s screen, my first instinct was to adjust the exposure and shoot a second image. Fortunately this instinct was quickly replaced by the realisation that the image was far more powerful as shot and did not require a face to communicate the hardships faced by homeless persons. Similarly, Not Quite Alfresco Dining (pic 10) shows a person who has seemingly become inured to eating most if not all their meals in public view and foregoing the dignity that we take for granted.

If this subject and/or images have upset anyone, I do apologise, but the subject is real and alive wherever we live and I hope this post will encourage viewers to pause and reflect. 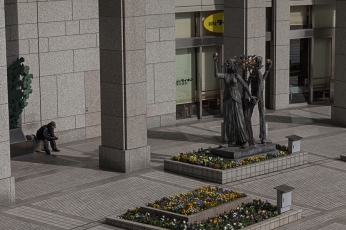 63.03 The Forlorn and the Statuesque

63.11 Not Quite Alfresco Dining