Nagano is probably best known outside of Japan as the host city for the 1998 Winter Olympics, yet within Japan it is a different story, where an estimated six million visitors per year are attracted by Zenkoji Temple.

In fact, Nagano has grown around the temple. The temple dates back to around 522AD when the first Buddha image was brought to Japan from Korea. Known as the Ikko Sanzon statue, it is the temple’s most sacred object and is never viewed. The closest one gets to a viewing is that of a replica statue placed on view once every seven years.

The temple has moved several times in its history for security reasons, with the current building dating from 1707. Believers from all Buddhist sects are welcome – a significant reason for its popularity.

Zenkoji is one of those large sprawling temple complexes that wears signs of its feudal past and one can easily imagine blood having been spilt during its history – somewhat inevitable given the significance of the Ikko Sanzon statue.

The temple is easily reached being less than two hours by Shinkansen from Tokyo, followed by a ten-minute bus trip from Nagano Station. I would, however, recommend walking along Chou Dori from the station to the temple as genuine pilgrims would.

A short distance inside the grounds, one passes through the Niomon Gate guarded on either side by large Deva Guardians (pics 2 to 4). The sandals hanging at the front of the Gate (pic 3) are offerings from visitors, albeit a bit too small for the guardians.

As is the norm in the approach to many Japanese temples, one then passes along a walkway lined with souvenir and food shops on the way to the main building, which, as can be seen from pic 5, looms large.

I would have liked to show more shots of the main hall (Honden), but on the day I visited the officials’ discouraged internal shots, hence my offering here of only pics 6 and 7. One should not be alarmed by the prominence of the swastikas in these shots, as a backward swastika is simply the Buddhist symbol for a temple. Sometimes setbacks have a silver lining and had I lingered longer inside, I would have missed the shot of the praying hands (pic 1) that I feel is a true representation of Zenkoji.

Within the Kyozo (pics 8 and 9) is an octagonal rotating sutra holder containing a complete set of Buddhist sutras. It is believed that persons who make one full rotation of the holder will be blessed with as much religious merit as chanting all the sutras.

Of the many statues on view within the Zenkoji complex, one of the most impressive is Roku Jizo, which is situated between the Sanmon Gate (main gate) and the Honden. Roku is Japanese for six and Jizo are protectors, thus Roku Jizo are the protectors of the six realms through which all souls must pass to attain enlightenment. Each Jizo protects one of the six realms; namely hell, hungry ghosts, animals, asura, humans and heavenly beings.

The statue of Zizo-do (pic 12) is clearly that of a deity protecting children and what appeals in this photo is the contrast between a centuries old statue and the contemporary nature of the offerings made by devotees. This is yet another example of the way the Japanese seamlessly accommodate and blend the old and the new into their daily lives.

I commented earlier that Zenkoji retains the feel of a place with a bloody and turbulent past, which is supported by the memorial monument for the Sato brothers (pic 13). This is the oldest memorial stone within Zenkoji and was dedicated to two warrior brothers (Tsugunobo and Tadanobu Sato) by their Mother over 600 years ago, following their deaths in the service of their master. The respect shown to the dead is further evident in the well-maintained graveyard (pics 14 and 15), where the pagoda style building in the background of pic 14 is the Zenkoji History Museum – a relatively new structure.

A common sight at Japanese temples is the practice of visitors bathing in the incense smoke from burners, in this case (pic 16) from a massive lion incense burner outside the main hall. Finally, there are some shots I cannot resist including those of traditional Japanese wedding parties (pic 17); the serenity found in the wide passageway of a sub-temple within the grounds (pic 18); and the way that nature takes its opportunities to bless us with simple beauties (pic 19).

There is much more to discover at Zenkoji than what is shown here and as one of Japan’s great temples, I would highly recommend visiting if the opportunity presents. 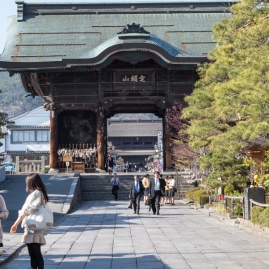 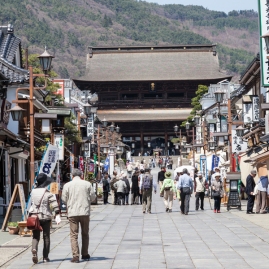 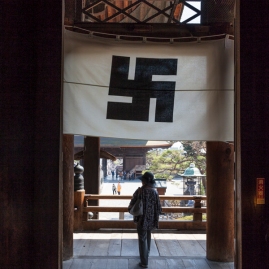 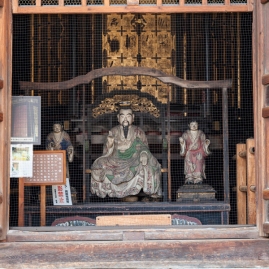 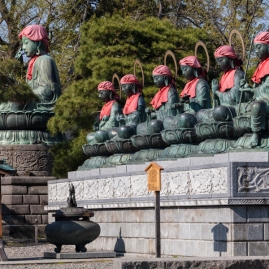 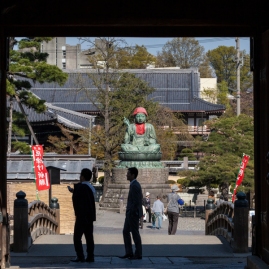