A short train journey of approximately 20 kilometres from Hiroshima followed by a ferry ride brings one to Itsukushima Island or, as it is more popularly known, Miyajima.

Even those with little knowledge of, or interest in Japan are likely to have seen photographs of Miyajima’s famous Floating Torii (also known as Otorii or Great Torii), which is acclaimed as one of Japan’s three most scenic views and said to be the most photographed structure in Japan. Now it is my turn to humbly add a few more.

When viewed from Mount Misen (pic 1), the Floating Torii can be seen about 200 metres out to sea in a direct line with the Honden (main hall) of the Itsukushima Shrine, which is similarly built over the water. The decision to build the torii and shrine over the water is testament to the sanctity of the island, which, since ancient times has been revered and worshipped as a sacred place. It was believed that locating the buildings over the water would allow Shinto followers to worship without despoiling the sanctity of the island. Although such beliefs and the strict rules governing access to the island have been relaxed over time, even today no births or deaths are allowed on the island.

The first Floating Torii was built in the 12th Century and the current structure dates back to 1875. To refer to it as “floating” is somewhat misleading in that Otorii rests on the seabed, where its solid structure and weight of some 60 tons provides ample stability. Included in the overall weight are seven tons of (fist sized) stones filling the box shaped upper section of the torii.

Prior to visiting Miyajima I had seen many brilliant photographs of the Floating Torii, yet when on site I found myself more interested in the torii’s relationship to its environment as shown at pics 2 to 5. I recall the thrill on my first visit of seeing the Floating Torii in the distance from the ferry terminal and watching it grow in stature as the ferry approached the island – an experience shared by many over the centuries. Similarly, when viewed from the island, one is drawn to thinking of how the mainland has changed over Otorii’s lifetime. In turn, one wonders how it will change in the centuries to come and it is comforting to think that a nexus will continue to exist between the ever-changing world on the mainland and the traditional past represented on the island.

Itsukushima Shrine stands in a protected cove, with all the shrine’s wooden buildings rising out of the sea, as can be appreciated from pic 6. At high tide, the entire shrine complex appears to float and at low tide, visitors and the island’s resident deer population can stroll on the sand between the buildings.

The accompanying photographs give some idea of this unique place, which includes the only Noh stage in Japan (pics 7 and 8) that rests upon the sea. I particularly like the way the stage blends with the beach and the surrounding hills (pic 8) to create a contemplative scene, hopefully being enjoyed by the lone person on the shore.

As with all shrines, they are functional places and during my visit a ceremony (pic 9) was underway. Connecting the mainland to the shrine is Sori-bashi (arched bridge) shown at pic 10, an imposing structure that is believed to have served as access for imperial messengers on important festive occasions. The bridge was first built around 1240, with the current bridge dating back to 1557.

Adjoining Sori-bashi is the Tenjin Shrine (pics 11 and 12) dedicated to a deity of education and intelligence. This building was constructed in 1556 and served as a venue for monthly Renga poetry ceremonies through to the middle of the Meiji period. To distinguish its later build, this building and the Noh Stage are not coated in the vermillion lacquer used predominantly across the Itsukushima Shrine buildings, but have been left untreated. This has allowed the timber to age naturally, which I found quite in keeping with the shrine’s exposure to the elements.

Whilst I did not visit the five-storey pagoda (pic 13), it is a prominent landmark built on a bluff overlooking the Itsukushima Shrine, first constructed in 1407. Finally, I end with a couple of shots (pics 14 and 15) of Otorii at low tide where it has sat majestically for centuries. 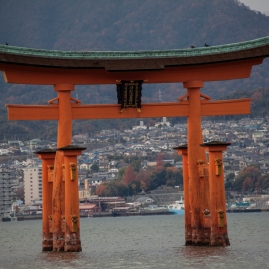 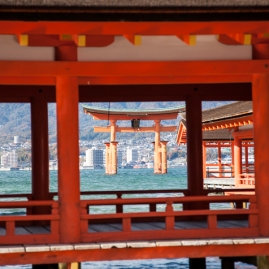 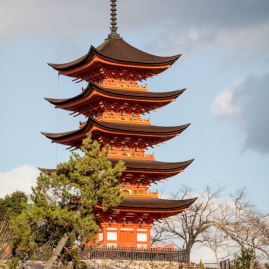