In this post I want to talk briefly about two of my favourite images from my Japan trips and the need for patience in order to capture each shot. 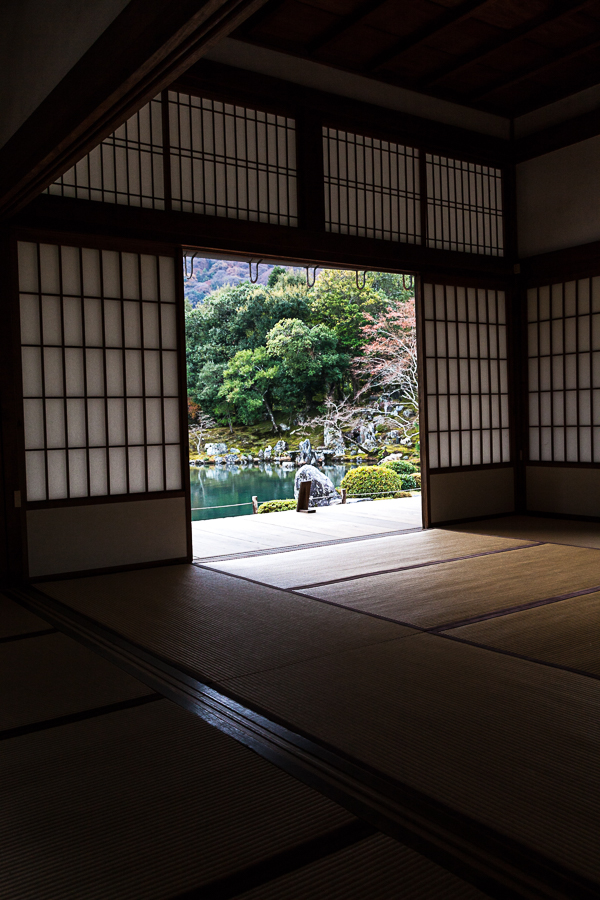 Monks’ reward (pic 1 above) was taken from inside a room at Kyoto’s Tenryu-ji Temple, but lived in my mind for several weeks before I got the shot. When I first visited Tenryu-ji on a busy holiday weekend it was teeming with people drawn by the autumn foliage, thus making this capture impossible at that time. Knowing that I was returning to Kyoto in a few weeks, I decided to wait and although the red leaves of the autumn maples had long gone, having the space to myself allowed me to relax and imagine how life may have been in the early days of this wonderful temple.

The buildings and gardens of Tenryu-ji, like those of the other renowned Kyoto temples, are the result of hard labour, which makes one reflect on the physically arduous lives of monks at that time. It was that train of thought that led me to imagine that being able to spend time in such a serene space and place was a reward for their labour, hence the title of “Monks’ reward”. Of course, this might be nothing more than a figment of my imagination, but it is how I think of this place whenever I look at this shot. 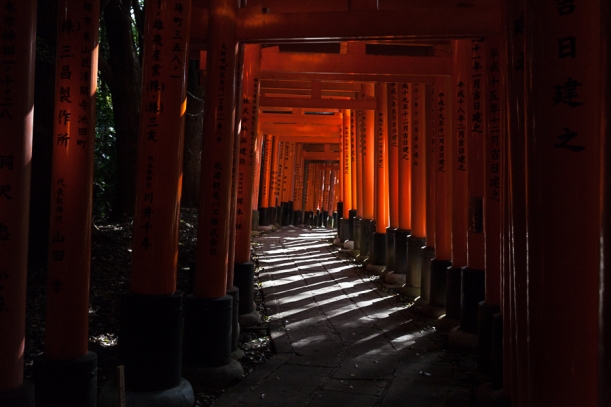 Those familiar with Kyoto will recognise Pathway to tranquility (pic 2 above) as having been taken at the Fushimi Inari Shrine. Once again patience was required to capture the shot, though not as much as for the previous photograph. Before visiting Fushimi Inari I had seen many photographs of the shrine and was really quite resigned to capturing my own version of what others had already captured. Then I got lucky when I reached this point on the path with the angled side lighting creating wonderful highlights and shadows. However, I was not so lucky in that other people were moving through the shot in each direction, thus I was presented with another exercise in patience.

Whilst my preference was to capture the shot without people I would not have objected to a geisha or other kimono clad people. Unfortunately, people in coloured puffer jackets didn’t fit the mental image I had created. My luck held in the sense that the light held and eventually I was rewarded with a clear people-free shot and managed to get off a couple of frames before the next puffer jacket appeared. That was enough. I captured my moment in time and got a shot of Fushimi Inari I had not seen before. Now, whenever I look at the shot I don’t think of puffer jackets and having to be patient, I really do see a pathway to tranquility.

Thanks for reading this post, which is different to how I’ve structured my series of Japan posts and is somewhat of an indulgence on my part. However, I would like to finish off 2019 by talking about a few shots that are important to me.

Tenryu-ji Temple located in Kyoto’s Arashiyama district is one of those places for which adjectives were invented.  However, perhaps pointing out that Tenryu-ji is the first ranked of the Five Great Zen Temples of Kyoto will stand as sufficient testimony to its significance through the ages.

Magnificent buildings within magnificent gardens within a delightful town make a visit to Tenryu-ji an experience to savour and remember.  My first visit was on a holiday weekend during autumn and although the crowds made it impossible to take internal shots, the communal enjoyment and celebration of the autumn colours further enhanced the experience.  An earlier post (Autumn in Japan) included several shots from Tenryu-ji and further examples of the autumn hues are shown here via the photographs of the Sogen-chi Pond.  When pondering the scene, bear in mind that by retaining the same structure since their design in the fourteenth century by Muso Soseki, these gardens have truly passed the test of time.

A return visit some weeks later on a quieter day provided an opportunity to leisurely enjoy the buildings and the interior spaces.  The use of dark, heavy timbers creates atmosphere and the joy of walking on timbers smoothed over the years by the steps of countless visitors is one of life’s simple pleasures.

Sitting on the Tatami floors in the Hojo (main hall) looking over Sogen-chi Pond to the landscape beyond is when one really appreciates this place.  The views are serene and I distinctly remember reflecting on how difficult a monk’s life would have been centuries ago, yet how apt a reward to be able to recharge one’s spirits by gazing over a view such as that still seen today.  From that moment I have thought of Tenryu-ji’s underlying character as regenerative.

A walk through the temple buildings reveals links to the past.  One such link is the image of Daruma (pic 9), the Indian Buddhist monk considered to be the founder of Zen Buddhism.  Similarly, pic 10 shows a shrine to Emperor Go-Daigo who lived and studied in a villa on the site of the present temple.  Following his death, Ashikaga Takauji (the first shogun of the Ashikaga shogunate) ordered the villa’s conversion to a Zen temple.

Of course, there is always place for fun amidst history and a popular attraction is a little ornamental pond where visitors delight in trying to land coins onto the frog statues. 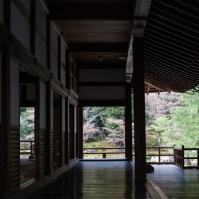 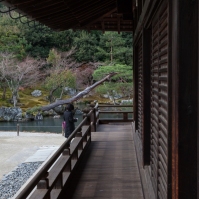 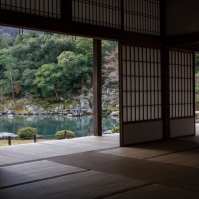 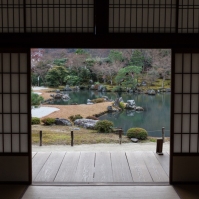 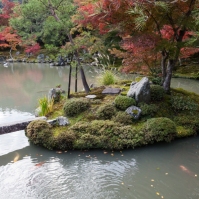 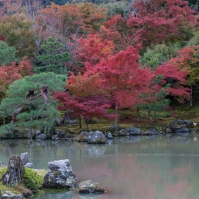 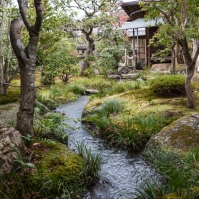 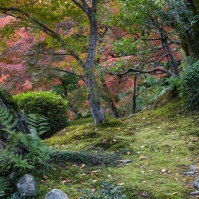 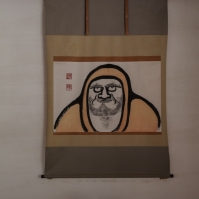 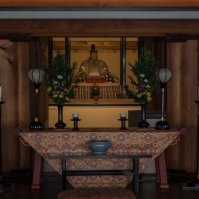 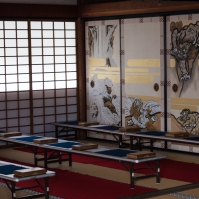 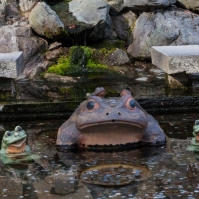