Kagurazaka is located close to Tokyo Central and given its past as a prominent entertainment district, I had hoped a visit would yield further examples of old Tokyo. This was not to be the case. Whilst I’m sure that with more time one could find some interesting links to old Tokyo, including a number of surviving geisha houses, the Kagurazaka I found was that of a rather fashionable and western-friendly district.

The beauty of travelling is that even when one does not find what one expects, the unexpected is nevertheless interesting. Kagurazaka seems to pivot around its shopping street, which is closed to vehicles around lunchtime each day, thus creating a relaxed pedestrian mall. However, apart from enjoying the relaxed environment, this street held little interest for me.

The interest lay in the side streets and alleys that lead away from the main street and then meander in the manner one comes to expect when walking in Japanese districts where the urban layout seems reminiscent of times past. Indeed, venturing into the side streets is a tad similar to Kyoto’s Gion district where, although the modern world has shouldered its way in, the street layouts allow one to imagine life in the glory days.

For this blog I have selected photographs consistent with my two main impressions of Kagurazaka. My first and strongest memory was that of the cobblestoned streets and alleys, a street surface that may be cursed by cyclists, yet is invariably appealing in the aesthetic sense and immediately creates atmosphere. Although today’s cobblestones are unlikely to be original, they succeed in slowing the pace of life a little and at the same time hint at the district’s interesting past.

My second main impression was that the district felt western-friendly, predominantly due to the variety of restaurants tucked away in side streets. I later learned that Kagurazaka has a reputation for being Tokyo’s French Quarter and is home to two French schools. The accompanying photographs show a small selection of the eating and drinking establishments in the area.

Visitors to Japan will certainly have noticed the very popular pachinko parlours and may have also noticed the smaller and more discreet TUC shops included in pic 7. As the title “Cashing in” implies, these venues allow players to exchange their pachinko tokens for cash, thereby getting around Japan’s gambling regulations. At the other end of the cultural spectrum, pic 8 shows a small street shrine allowing people to worship or seek some respite from a busy day.

The most unusual of the restaurants shown was “Hajimeno Ippo” – Tokyo’s first garlic restaurant. Whilst I doubt I would be paying a visit, it seems well placed in the French Quarter and I believe it can often take some time to get a booking.

Revisiting Kagurazaka for this blog post has made me realize that I will revisit in person when next in Tokyo to look for those old Tokyo remnants I sense are there to be found. 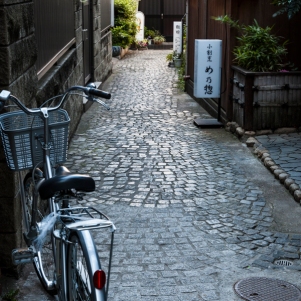 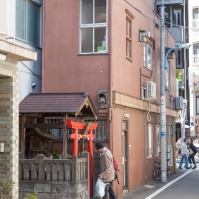 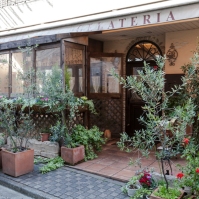 Cook on a smoko