Karesansui is the Japanese word for dry landscape gardens. Introduced to Japan as landscape concepts from China and Korea around the seventh century, the form progressively evolved to take on a distinctive Japanese style. To borrow a relatively modern terminology, karesansui may be described as minimalist in their design, an approach consistent with the Japanese view that frugality is virtuous.

Karesansui are gardens for the mind, designed to encourage contemplation and meditation. From my experience of viewing karesansui I can certainly attest to their ability to induce a contemplative state of mind. Alas, my meditative skills are very limited, but one can imagine such environments being conducive to intense meditation for skilled practitioners.

I regret not having spent more time visiting and photographing karesansui, but in this post I offer a selection of shots from Kyoto’s Ryoanji and Ginkakuji temples. Ryoanji is considered to be the finest example of dry landscape gardening and Ginkakuji’s expansive Sea of Silver Sand and large (Mount Fuji) sand cone is quite unforgettable.

Photographs are a poor substitute for the real experience, but I hope you will experience a little appreciation of these wonderful and enduring gardens. 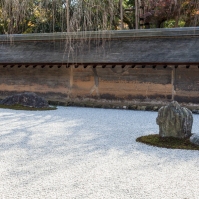 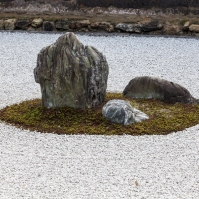 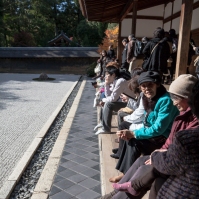 Located in Kyoto’s foothills, the ideal way to visit Ginkakuji is on foot via the Philosopher’s Path. Turning right at the end of the path, the final leg is uphill between rows of souvenir shops and food outlets, well placed to cater for hungry visitors on the way in or out or both.

Ginkakuji dates back to around 1480 and is a most significant temple. Originally built as a retirement villa for Ashikaga Yoshimasu, a shogun dedicated to the arts, Ginkakuji became a centre for contemporary culture that was to become known as Higashiyama Culture. Arts that developed and flourished during this time include arts that are seen today as synonymous not just with Japanese art, but with Japan. Imagine being at the centre of a culture developing the tea ceremony, flower arrangement, poetry, Noh theatre, garden design and architecture and one gets an idea of life around Ginkakuji at that time. Of even more significance is that the culture extended beyond the enjoyment of the aristocratic circles and filtered through to impact more broadly on the whole of Japan.

Ginkakuji is visually impressive in a rather uncomplicated way in that it relies on relatively few elements to deliver a serene environment for those who have lived there and for those of us able to visit only fleetingly. In this post I wish to draw attention to three key elements.

The best-known building is the Silver Pavilion (pics 1 and 2), named after an intention to cover the building in silver to both imitate and contrast with Kinkakuji (Golden Pavilion) built by Yoshimasu’s grandfather. Despite the original plan never being carried out, the building has aged gracefully and its survival through many fires and earthquakes since is a tribute to its architects and builders.

Also dating back to the temple’s foundation, Togo-du (pics 3 to 5) is the oldest example of Shoin architecture in Japan, the architectural style still governing how most contemporary tatami rooms are designed today. Within the building was the Dojinsai tearoom where Yoshimasu would often take tea and which many scholars consider to be the predecessor of the Tea Pavilion.

The Sea of Silver Sand (pics 6 to 9 and 11 to 13) is impossible to miss upon entering the grounds and when viewed from the higher reaches of the garden. It is, of course, a lovingly cared for dry sand garden that commands the eye, drawing one’s gaze towards the Silver Pavilion and the large sand cone named “Moon Viewing Platform” reminiscent of Mount Fuji.

A key element featured here only incidentally, is Ginkakuji’s magnificent gardens – an absolute must see in autumn. One of the many features is the moss garden, glimpses of which can be seen in pics 2 and 5. From there, one follows a path that meanders around the hillside overlooking the temple buildings and where even the fencing (pic 10) is impressive. The meandering path invites one to stop frequently to enjoy the views over the temple grounds and beyond to Kyoto (pics 11 to 13), a view that I always found delightful.

Ginkakuji is one of those places that make one relax and slow down. It is serene; it is tranquil; it invites contemplation and meditation; and this is largely due to the vision of a Shogun interested in arts and culture who, despite reigning in bloody war torn times, set in place the foundation for arts that came to be defining elements of Japan. 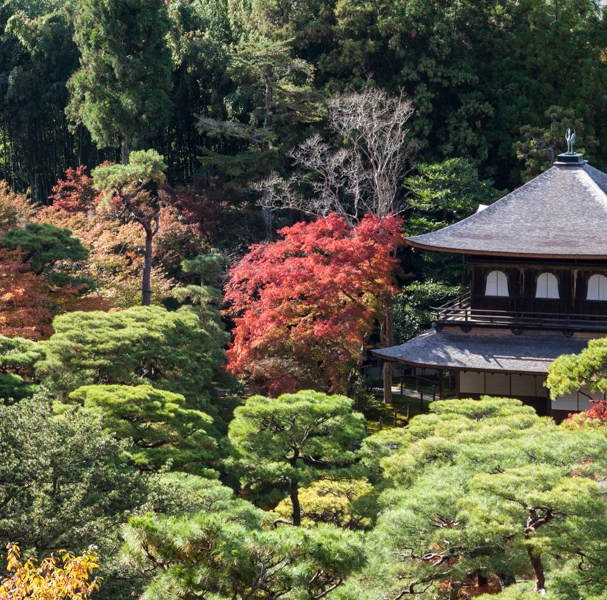 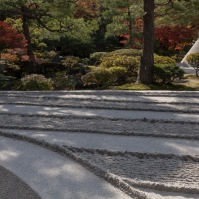 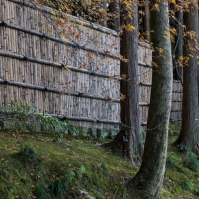