Have you ever seen a photograph of a place that made you want to see it with your own eyes? I think most people have had this experience and seeing photographs of the Kintaikyo Bridge was all it took to put the bridge on my list of places to visit.

Kintai-kyo translates to “brocade sash”, with the bridge’s unique five span structure giving it a rippling appearance and ensuring its place among Japan’s most significant bridges. Originally built in 1639, the bridge was restricted to use by successive feudal lords and their vassals until 1868, since which time it has been used by the general public.

The site was initially chosen for its strategic value as a means to connect the township of Iwakuni with a castle built around the same period by Hiroie Kikkawa – the first feudal lord of the Iwakuni Domain. By building the castle on a mountain bound by a U-bend along the Nishiki River, the river effectively became a moat.

Throughout its history, floods have posed a greater threat than earthquakes, several of which have been survived without damage. For example, most recently, the October 2000 Geryo Earthquake (6.4 on the Richter scale) was reported to have caused the bridge to sway massively, as well as causing extensive damage to other structures in the region. Kintaikyo Bridge, however, emerged free of deformation, which was attributed to the shock absorbent capabilities of its more than 20,000 members.

Today the bridge is understandably a major tourist attraction and my main regret is that my visit did not coincide with any of the festivals involving the bridge. One can imagine how regal the bridge would present during festivals and how its history would come alive in the presence of participants in traditional costumes. I guess this means Kintaikyo Bridge is still on my list of places to visit.

The accompanying photographs are self-explanatory and show various views of the bridge. Like many Japanese structures, it presents some physical challenge to negotiate the five arches, though the children returning from school (pics 8 and 9) seem to delight in their twice-daily exercise. 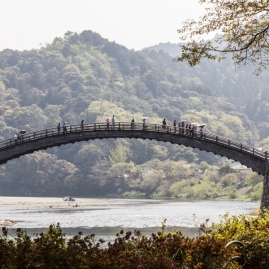 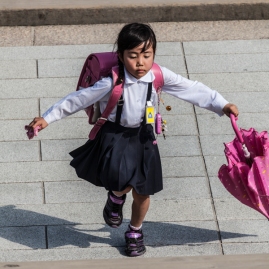