Blur is not a word one normally associates with geisha, yet it aptly describes my most valued sightings of geisha from dusk onwards when their focus is getting to their next appointment. This is their busy time and in an evening with several bookings, time is money and they are ladies in a hurry. Sightings can be a “where did she come from?” experience as they pass in a blur of colourful elegance, appearing to float above the pavement with their short, quick steps.

Pics 1 to 3 are examples of geisha blur, all shot in Kyoto’s Gion district. Sadly the Geiko shown in pics 1 and 2 show signs of unwanted attention and it was disappointing to witness the lack of respect shown by many people obstructing their path and popping flashes to get the souvenir shot. Nevertheless, their grace shines through. I did not travel with a flash unit and was happy to record the blur, nor did I elect to join in chasing, which is why pic 3 shows a Maiko moving away. It is unfortunate that a frontal shot was blocked, as she was the most beautiful Maiko I saw. However, there is a certain pleasure in accepting blur as the trade-off for retaining one’s dignity. (I guess a career as paparazzi is out of the question.)

To stay with this theme, one must understand that geisha are celebrities with a difference. Their celebrity is an inheritance from being the current custodians of a traditional entertainment form unique to Japan. Indeed, in my opinion, geisha represent Japan’s most recognisable icon. Unlike western celebrities who seemingly crave attention, geisha go about their business in a quieter, more refined manner. However, their time-honoured practice of walking to appointments means that they are frequently exposed to an adoring and curious public.

Much has been written about the world of geisha, yet so much remains unknown. Retaining an element of mystery and intrigue is essential, but I would like to touch on one aspect that tends to be somewhat overlooked.

A general perception of Japan is that of a male dominated society and there is much to support this perception. Yet the geisha culture challenges this perception. The world of geisha is female dominated, with men occupying specific roles such as dressing, where strength is required to perfectly arrange a geisha’s apparel. The okiya within which geisha live and train under the guidance of an Okasan (mother) is exclusively female and most importantly, the Tea Houses (ochaya) where geisha entertain have traditionally been female owned and operated. I find it fascinating that this most feminine of Japanese cultures has emerged from a male dominated society and whilst geisha do not openly associate with feminism, their achievement is significant.

Pics 5 to 7 are of a young Maiko in Kyoto during the cherry blossom season. I gained the impression that she was somewhat uncomfortable in the public spotlight and perhaps she had not yet realised her powers.

Pics 8 and 9 are of a Tokyo geisha, shot in the late afternoon on her way to a nearby ochaya. Tokyo geisha are more elusive than their Kyoto counterparts and these shots were my reward for several hours spent wandering the streets of Mukojima. It was an enjoyable time as Mukojima is one of Tokyo’s older areas and although my primary focus was to see geisha, the area is interesting in its own right. After wandering for some time, I came across an area that simply felt right and decided to hang around for a while. (Maybe there is a bit of paparazzi in me after all.) A short time later, I heard the distinctive clip clopping and jangling sounds and there she was coming in my direction. My satisfaction with the day’s shoot was heightened after speaking with some Tokyo residents who advised that many people live for years in Tokyo without ever seeing geisha. Maybe I got lucky.

The final photograph (pic 10) of the older woman in kimono was taken shortly after pics 8 and 9. The wrapped object the lady is holding is a shamisen, a stringed Japanese instrument, which she plays as accompaniment for geisha performing dances. I would have liked to know if she had once been geisha, but alas, my Japanese language skills were inadequate.

It is always a special experience when one encounters geisha, whose numbers are unfortunately declining. One hopes this decline can be arrested and their place in Japan’s traditional art forms can be forever ensured. There are traditions that should never be lost. Geisha is one such tradition. 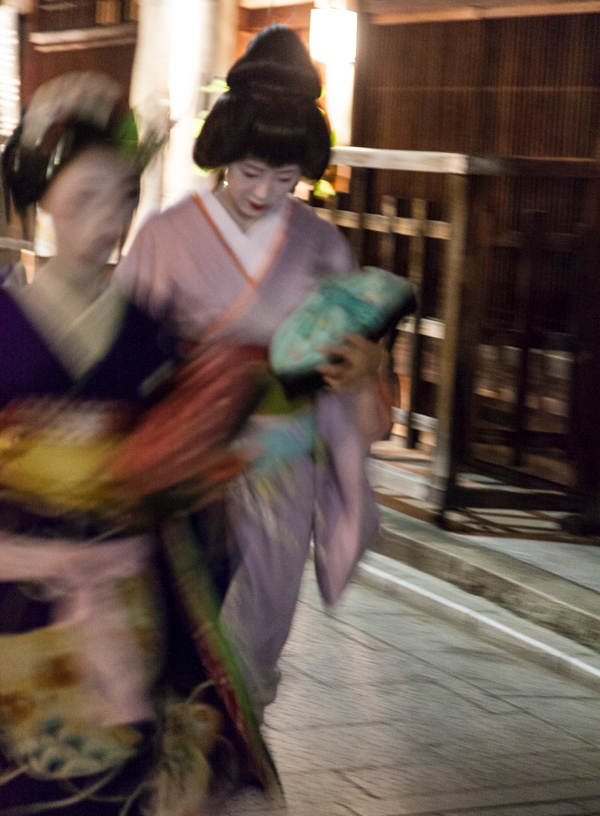 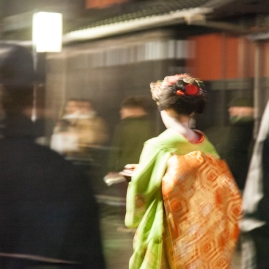 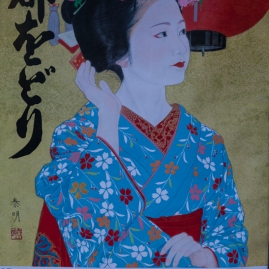 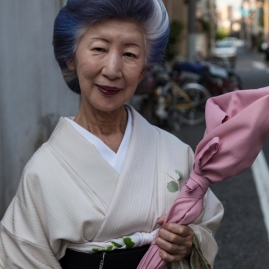