The best pleasures are those of the unexpected variety, such as I experienced on a visit to Kamakura’s Tsurugaoka Hachimangu Shrine. One is always drawn to a crowd and in this instance, a crowd had gathered around the Maiden (an open sided stage or pavilion) in front of the stairway leading to the main hall. Drawing closer it became apparent that, purely by luck, I was about to witness my first Shinto wedding ceremony.

As with western-style ceremonies the centre of attraction is the bride, as one will surely appreciate from the accompanying photographs. The ceremony itself is symbolic and does not legally confer marriage. This takes place previously via a civil ceremony in accordance with Japanese law.

Happening across the Kamakura wedding conducted in public was most fortunate, as most Shinto wedding ceremonies are conducted within the private areas of shrines, thus the public can only view the participants before and after. Nevertheless, it is a sight I would never tire of and I could quite happily spend my weekends photographing Shinto weddings. (Bookings will be gratefully accepted haha.)

As with many things Japanese, the ceremony and the costumes communicate a link to past traditions – a link further emphasised by the historic significance of the shrines within which the weddings take place. The locations for these photographs, the Hachimangu Shrine at Kamakura and Tokyo’s Meiji Jingu, are each steeped in history and are highly significant sites in their own right.

The brides wear exclusively white garments – a colour associated with purity in Japan, with the only exception appearing to be adornments worn in their hair. In ages past, I understand that brides would paint their faces and arms white, as do geisha, though this practice is no longer followed. The bridal kimono is intricately embroidered in patterns of the bride’s choosing, though the patterns do seem to draw heavily on symbols from nature. Perhaps the most striking part of the costume is the wataboshi, the large oval shaped hood intended to conceal the bride’s face to everyone except the groom. Whilst I don’t think it succeeds in this respect, the wataboshi is undoubtedly elegant and adds an air of mystery. For viewers who may be wondering, of the five brides shown in the photographs, four were wearing wigs.

I will now allow the pictures to tell the story. Pics 1 to 5 are shots from the Kamakura wedding and pics 6 to 17 were taken on a rather wet and cold afternoon at Tokyo’s Meiji Jingu, where a number of weddings were taking place.

Of the four brides photographed at Meiji Jingu, it was interesting to observe their different personalities. The first bride (pic 6) was ebullient and radiated happiness and joy. The second bride (pics 7 to 9) was simply a picture of elegance, whom one could happily photograph all day long. (For the photographically minded, I acknowledge that pic 9 is greatly over-exposed, but I like it anyway. It was unintentional and my best guess is that my shutter fired at exactly the same time as the official photographer’s flash.) The third bride (pics 10 to 12) looked so nervous at the conclusion of the ceremony. However, some calming words from her attendant and fine-tuning of her kimono soon transformed her into a radiant bride. Finally, the fourth bride (pics 13 to 17) epitomised grace at all times.

I hope this post gives at least a little glimpse into another of Japan’s links with tradition. 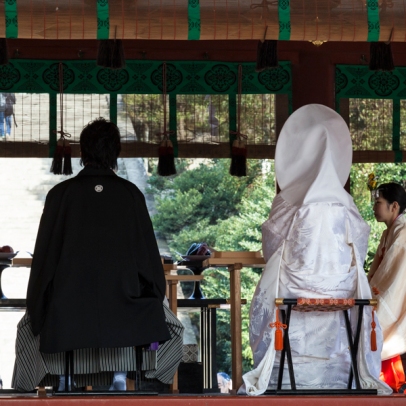 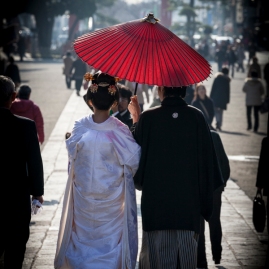 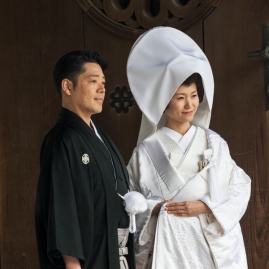 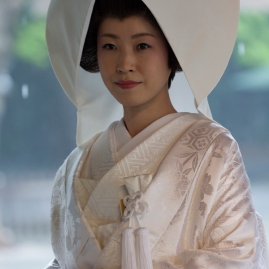 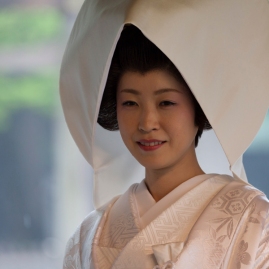 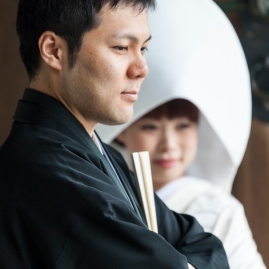 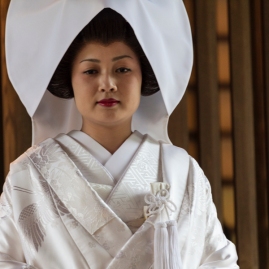